Despite The Sell Off, Lowe's Looks Good Value

Investors in Lowe's  must have felt they were living in some kind of parallel universe after the company's excellent set of results were greeted by a 6.2% markdown on the day. As ever, the usual knee-jerk response from journalists was to seek out any possible negative in the company's report or commentary. Lowe's results were a lot better than many made them out to be.

What really happened?
Perhaps the most relevant news on Lowe's results was the old news! The stock had such a major run up before the results that almost anything it said could somehow have been construed as a disappointment.

Not only had Lowe's share price increased by more than 50% in the last year, but it was also outperforming its main rival Home Depot . 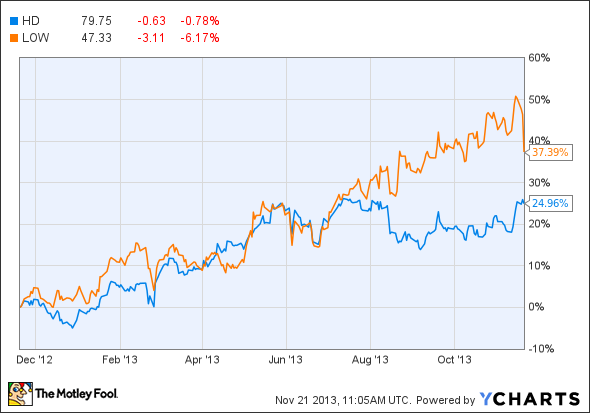 
While it's true that economic commentators have been becoming a little more cautious on the housing market due to higher interest rates, you certainly wouldn't have noticed it from Lowe's stock performance prior to the results.


Frankly, the sell-off after the results looked like a correction of an overbought move and possibly some hedged pairs trading going on with Lowe's versus Home Depot. In other words, traders might have favored buying Home Depot and shorting Lowe's.


In reality, there were a number of positives from this report.


First, full-year earnings-per-share guidance was raised for the second time this year and now stands at $2.15.


Second, Lowe's management gave a positive industry outlook. Management forecast that growth would persist in the fourth quarter and went on to state "we expect further acceleration of industry growth next year."


Third, it confirmed that its program of product resets achieved around 100 basis points in gross-margin improvement once the product lines "reached stabilization."The reset program is a project to adjust the products the company sells in order to normalize inventories across categories. Stabilization just refers to when it has cleared out the old inventory.


Clearly, the project is working and Lowe's said that only 66% of its business was stabilized by the end of the quarter. Investors can look forward to margin improvements from the remaining 34% in the future, as well as from the 20% of its business that hasn't even been subject to resets yet.


Finally, the makeup of its sales is suggesting industry strength. Lowe's declared that its Pro sales "continue to outpace our [do-it-yourself] consumer." Indeed, only a day earlier, Home Depot said a similar statement when its management declared "the recovery of our pro business continues in the third quarter, our pro business grew at a slightly faster pace than our consumer business." Both companies see this as a sign of cyclical strength in housing.


In addition, Lowe's performed well with its large product categories such as flooring, kitchens, and appliances. This is in line with what appliance makers like Whirlpool  are saying about the marketplace, and customers' willingness to replace appliances that they bought 10 years ago at the height of the housing bubble. It also confirms the positive outlook in the remodeling market index by the National Association of Home Builders. Weak spots?The report was generally positive, but there were some points of caution. While appliance sales were strong, the level of promotions was significant enough to reduce the gross margin by 10 basis points. Such developments will obviously concern Whirlpool investors, especially as LG has now been added to Lowe's appliance offerings.


In addition, Lowe's has Samsung and LG appliances highlighted on its floors. This is especially relevant given that Whirlpool won an anti-dumping ruling against LG and Samsung earlier this year.


The second possible sore point was that its forecast of 5% full-year comparable- sales growth implies 4th quarter comps growth of around 4%. As the graph shows, this is somewhat lower than the last two quarters. 
On the other hand, last year's fourth quarter was positively affected by sales due to Hurricane Sandy. Furthermore, the full-year forecast of 5% is an upgrade from the second quarter guidance of 4.5% and first-quarter guidance of 3.5%. It's hardly bad news.


The bottom line
In conclusion, this wasn't a bad report at all. It's just that the stock had run up too much and investor expectations were probably too high Provided the housing market stays on track, the stock looks to be a good value on a P/E ratio of 17.8 times forward earnings as I write.
Posted by Unknown at 11:12 PM