FedEx and its main rival UPS  are well-regarded in the marketplace for their exposure to long-term growth from e-commerce related deliveries.However, it's less well-known that FedEx is also undergoing a major productivity enhancement program which should enable it to catch up to UPS in terms of margins and cash flow generation. These two factors make FedEx one of the most interesting stocks in the transportation sector, and it's worth taking a closer look to see if FedEx's growth prospects can justify the stock moving higher in 2014.


FedEx upgrades guidance
While e-commerce and its internal productivity improvements are the key to its medium term growth, FedEx will always be a correlated play on global trade. Indeed, its GDP forecasts are some of the most keenly watched data sets in the marketplace.


FedEx issues GDP forecasts because its revenues tend to correlate with global growth, and in particular global trade growth. Naturally, this means that the company has a pretty good handle on macro trends.  Consequently, the upgrades to its earnings and GDP forecasts were good news for FedEx and for the global economy.


Earnings per share are now expected to come in 8% to 14% ahead of last year, versus its previous guidance of 7% to 13%. As for its GDP forecast, the upgrade to U.S. and World expectations suggests a strengthening of growth in the fourth quarter.


E-commerce driving growth in ground servicesThough FedEx originally took its name from its express delivery services, the bulk of its profits now come from its ground segment. 
The driving force behind this shift in segment fortunes is that e-commerce revenues are growing in importance. In addition, the recession and the subsequent 'age of austerity' has created an environment where customers are trading off quicker delivery with express for the cheaper, but slower, option of ground.


UPS is seeing a similar dynamic. For example, its US domestic package segment grew revenue by 5% in the third quarter with its business to consumer business up 5%. Meanwhile, its international segment suffered a 2.5% revenue decrease with management noting on the conference call that  "the segment continued to be affected by shifting customer preference for deferred products."


In other words, UPS's customers are now more willing to accept slower delivery in exchange for a cheaper price.


Moreover, any margin improvement usually implies better free cash flow generation. Indeed, as the following chart points out, UPS has tended to sweat its assets better than FedEx has in recent years. 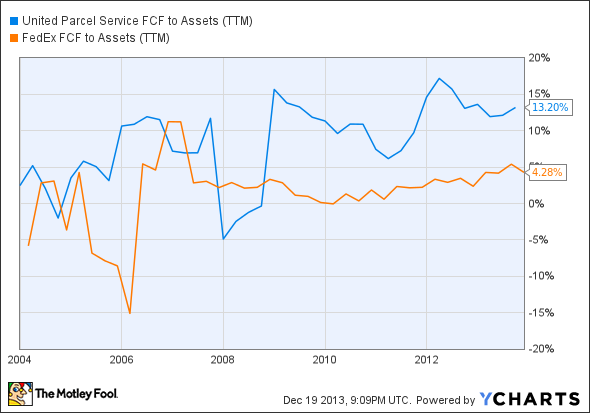 
No matter, FedEx should have plenty of opportunity to increase free-cash flow conversion in future years. To put the following chart into perspective, note that UPS converted around 9.3% of its revenue into free-cash flow in 2012. Moreover, FedEx's management declared in its recent conference call that it was "on track to be where we need to be" by the end of 2016.


Is FedEx still a buy?
Clearly, FedEx has an opportunity to catch up with UPS in terms of cash flow generation due to its profit improvement program. Furthermore, the productivity measures are the key to why analysts have FedEx earnings per share rising by 12.7%, 27.5%, and 20.2% in May 2014, 2015, and 2016 respectively.   If those predictions hold up, free-cash flow should grow strongly, too.


The analyst consensus would put FedEx on a P/E ratio of just 13 times its 2016 earnings. As an investor, you've got to decide whether you believe this is good value for the execution risk, and whether you think the global economy will let the company down.
Posted by Unknown at 1:39 AM