Time to Get Bullish on Toro?

The logic is simple: if you buy the housing recovery, then you should buy a recovery in spending on landscaping and gardening. In other words, companies that make landscaping equipment like Deere   or Briggs & Stratton  should be on your radar screen. If you also like the demographics behind golf, then a stock like Toro   will loom large in your thinking. It's time to take a closer look at all three.


Bullish on Toro
A quick look at its revenue by geography shows that 70% of Toro's revenue comes from the US, with Europe providing 12% and Asia 4%. In other words, Toro is still very much a North American play. Furthermore, a breakdown of its segment revenue demonstrates that golf landscaping, residential gardening, and professional landscaping are its key end markets. Essentially, Toro is a cyclical stock but there are good reasons why it can outperform in the current environment.
First, its residential lawn and garden segment is obviously tied to the housing market. Since this sector of the economy was at the epicenter of the crash, it's reasonable to expect it to behave in a super-cyclical fashion in the recovery.
Indeed, Home Depot and Lowe's have both reported stronger sales of garden equipment this year. Meanwhile, in October, Briggs & Stratton reported quarterly retail lawn and garden sales growth of approximately 50%. Although much of this is due to an easy comparison with last year's drought conditions, it's still a hefty increase.
Second, Toro's professional landscape and grounds business should see a lift in the future from new home construction. As new communities get built, the demand for amenities and infrastructure will go up as well. Indeed, Toro's management made some bullish noise on this segment in its recent conference call:

Toro continues to be added to many states and local government contracts. This helped increase our professional grounds business sales in 2013 and should bode well for business in 2014.

Deere may well have agreed to sell a 40% equity interest in its landscape business, but this is because the company is refocusing on its core agricultural business rather than a negative statement on the landscaping market.
Toro's profit-drive down the fairway
The third major revenue center is probably its most interesting. Golf is traditionally seen as a higher-income earner's pastime. While it's discretionary in nature, it's also affected by the weather. For example, there was a 5.7% increase in US golf rounds reported from 2011 to 2012 (in-line with an improving economy).
However, in its recent results, Toro's management outlined that US rounds played for the year only declined 5%, even as there were 6.7% less days open for play due to poor weather. This implies that golfers are playing more rounds, and should weather improve next year, Toro could see some favorable comparisons.
Overall, it's fair to say that Toro's prospects -- and particularly those of golf -- are tied to movements in mean household income. For example, here is a chart of Toro's revenue versus US household income for the highest one-fifth. Note that the income numbers are in current dollars (what was recorded at the time), when in 2012 the dollars equivalent figure is actually down 4.1%. This is done because Toro's sales figures will be in current figures too. Source: US Census of the Bureau, Toro presentations
It's a pretty strong correlation, although Toro probably saw some stronger years in 2003-2006 thanks to the housing boom. It also saw a far more severe downturn in 2009 as the world looked set to implode.
Revenue for 2013 came in with a 4.2% increase after 4% in 2012. Moreover, Toro is forecasting 4%-5% revenue growth for next year; all of which suggests that Toro is a business whose top-line growth equates closely to nominal GDP and income growth, albeit with more downside exposure should the economy fall back.
The bottom line
Toro's forecast revenue growth appears uninspiring, but it has some upside potential if the housing market strengthens. In addition, a cold winter snap will -- in common with Briggs & Stratton -- provide some upside for its snow blowers.
However, while both stocks look to be decent plays on economic growth in 2014, it's harder to make a case that either is a good value pick. 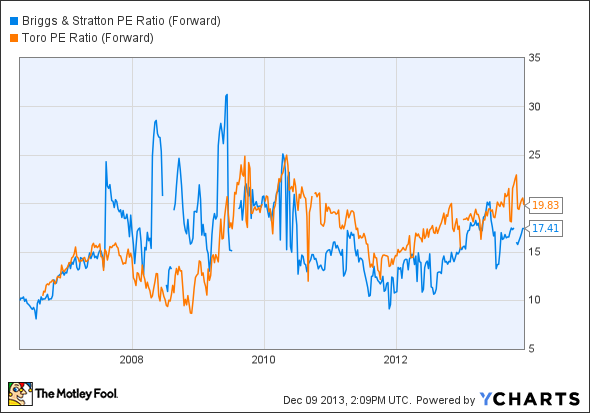 Briggs & Stratton P/E ratio (forward) data by YCharts
On a forward P/E ratio basis, Briggs & Stratton looks to be a better value. However, on a risk/reward basis, it's hard to make a case for Toro right now. Waiting for any kind of pullback seems to be a sensible strategy.
Posted by Unknown at 5:43 AM