Whenever General Electric  $GE gives results, the market tends to listen very closely. Its recent earnings report was broadly positive with orders up 8% and guidance of double-digit industrial earnings growth for 2014. However, a company of this size will never have all its industry sectors working well at any one time. In a previous article, its power and water, oil and gas, and lighting and appliances segments were looked at. Now it's time to look at its aviation, health care, and transportation units.


GE's profit split
In order to see the importance of its relative segments, here is a breakout GE's segments profits in 2013: 
Of the four most important sectors, aviation and oil and gas put in the best performances in 2013. Power and water disappointed -- particularly in the first half -- but orders and revenue came back strongly in the second half. In the fourth quarter alone, power and water equipment orders were up 81%, and segment profits rose 9%. Meanwhile, its health care performance was relatively mundane with just 4.4% profit growth in the year.


GE's health care segment and Covidien
Despite its relatively mundane performance, GE's health care results are interesting because they highlight a bifurcation in global health care spending on capital machinery. Austerity measures and cash pressures are putting pressure on hospitals in developed markets, while emerging markets are more willing and able to spend. For example, in its fourth quarter, GE's health care orders were flat in the U.S., with Europe only up 2%. Meanwhile, Latin American orders were up 15%, with China up 8%.


These trends play to the strengths of a company like medical device company Covidien  $COV . The company's is characterized by having relatively low-ticket medical devices; something very attractive to emerging markets. Indeed, its growth prospects and investment plans are weighted toward emerging markets. Covidien grew sales to the BRICs by 25% in its last quarter, and it plans to generate at least 20% of its total sales from emerging markets by the end of 2014.  All told, Covidien has the potential to outgrow its markets.


GE's aviation segment
Aviation has been the star performer in GE's industrial segment, and for a host of reasons the commercial aerospace market has bright prospects in 2014. On the conference call, GE's management predicted that its jet engines "will be up to 2,500 units, versus about 2,378 in 2013", but the most interesting commentary was concerning its 16% rise commercial spares demand. In answering an analyst question on the subject, Immelt replied that flying hours were "improving dramatically", and airlines were restocking as they had cut back on inventory levels in 2012. Meanwhile airline fleets are growing and aging as well.


All told, this is great news for a company like Heico  $HEI . Heico generates two-thirds of its sales from its flight support group whose services include parts, repair and distribution for airlines. The segment put in a stellar performance in 2013 with sales and net income rising 17% for the full year. Moreover, it estimates overall sales growth of 12%-14% for 2014. If passenger demand remains strong and airline profitability continues to increase, then Heico is likely to have another strong year.


Mining still not globally joyful
In general, it was a positive report, however there were some notes of caution. Transportation segment orders were 2% lower, with mining being the main culprit. Mining orders declined 60% with demand for mining parts described as weak. All of which is not good news for mining equipment company Joy Global $JOY .


The mining industry has suffered this year as commodity prices have fallen, and in the words of Joy Global's executive vice president, Edward Doheny,  "[Years] of investment in additional production capacity finally caught up with demand. This resulted in most major commodities currently in a significant supply surplus".  The outlook doesn't look great. Growth is slowing in China and the government taking steps to reduce coal capacity; the outlook is still murky. Moreover, prices for a commodity like copper -- traditionally seen as the most cyclical of all metals -- continue to decline. 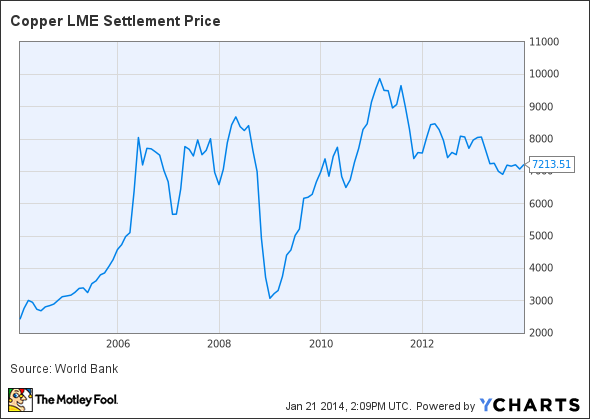 
The bottom line
In conclusion, it was a broadly positive report from GE. Aviation and emerging market health care look strong in 2014, but developed market spending on health care capital equipment looks moderate at best. Meanwhile mining looks headed for another difficult year unless China can reaccelerate its growth rate.
Posted by Unknown at 11:19 AM