Roper Industries  $ROP is one of the most interesting industrial stocks, not least because it appears to be more of philosophical concept than a typical industrial conglomerate. In essence, it's a collection of four disparate businesses that operate within their own highly profitable niche markets. The common philosophy behind each segment is that they are high-margin and highly cash generative companies operating with relatively asset-light business models. While this strategy has been working very well for Roper shareholders so far, is the stock a buy right now?


Roper reports full-year results
In order to quickly outline how Roper makes money here is a chart of its segmental operating profits in 2013. 
Having disappointed in the previous quarter, Roper reported some better numbers in the fourth quarter resulting in adjusted revenue up 9% and net earnings up 11% for the full year. Moreover, there are six key reasons why Roper can do well in 2013.


Margins and cash flow, increasing software, and growing orders
First, Foolish investors should appreciate how well the management has increased margins and cash-flow generation. Roper's gross margin was around 58% for the full year, but note how it has increased over the last few years, particularly when compared to companies like Danaher   and Dover Corp $DOV .  The latter two are not perfect comparisons, but they do provide a good benchmark to judge whether Roper's gross margin performance is merely a function of the economy or not. 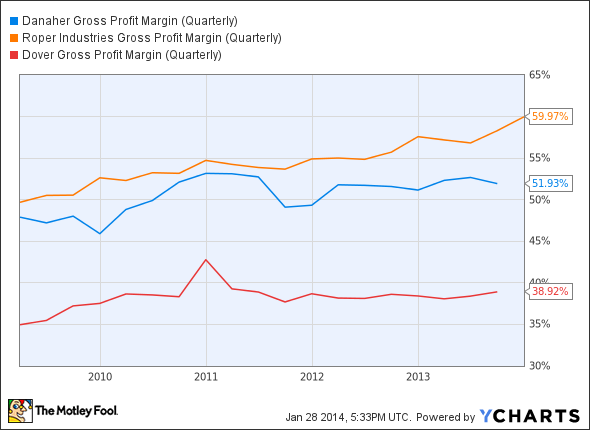 
Clearly, Roper is outperforming its peers in terms of gross margin, so this isn't just about the economy.  Moreover, its free cash flow generation and conversion is outstanding. Roper generated $760 million in free cash flow last year, representing a conversion rate of 141% of its net earnings. Looking into 2014, management predicted that operating cash flow conversion would be 140% of earnings. Based on my calculations, and Roper's guidance for full-year EPS, its free cash flow will amount to around $8.35 in 2014. In other words, it's on a forward free cash flow yield of around 6%.


Second, one of the reasons that Roper is generating increased margins and cash flows is due to its increasing amount of software sales. On the conference call, CEO, Brian Jellison outlined that "If you look just like the SaaS businesses, pure software businesses, we get more than a fourth of the Company's EBITDA out of that." Moreover, he also argued that if application software was included, the figure would be closer to half.


Usually, software as a service, or SaaS, based businesses tend to generate recurring revenues over longer periods. Indeed, Jellison disclosed on the conference call that Roper has "a lot of recurring revenue in radio frequency and in medical" and the fact that deferred revenue jumped 12.6% to $209 million bears that out. This implies that Roper is increasing the amount of long-term value it gets out of its orders.


Third, Roper's order book looked good in the last quarter, its book-to-bill was 1.01 versus 0.95 in the fourth quarter last year.


Recovering businesses, underlying guidance is better, end markets improving
Fourth, the businesses that had difficulty in the previous quarters managed to recover well in the quarter. Imaging (medical and scientific technology) orders were surprisingly strong with a double-digit increase. Meanwhile, its nuclear inspection business, Zetec, was described on the conference call as being weak "as expected", but its orders "tell us that really the worst is behind us". These two nuggets of good news help to de-risk the stock somewhat.


And finally, prospects in some of its end markets are looking better. For example, its water pumps business, Neptune (industrial technology), will benefit from increased housing starts. According to Halliburton and Baker Hughes the U.S. oil and gas rig count will at least stabilize in 2014, and this could be a positive for elements of Roper's energy systems and controls segment.


Is Roper a good value?
On a P/E basis, Roper is not the cheapest stock in the sector. 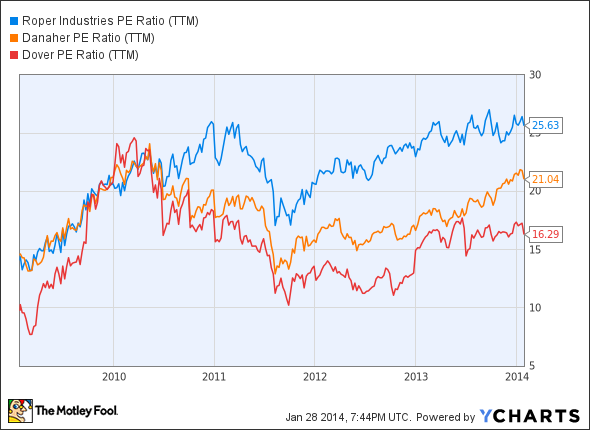 
Moreover, on a forward P/E ratio of around 22 times earnings, it's hard to argue that it is anything more than fair value at the moment. On the other hand, Roper is a high quality company and for the reasons articulated above, it has upside earnings potential in 2014. Foolish investors may want to keep an eye out for any buying opportunity should it dip from here.
Posted by Unknown at 4:10 AM